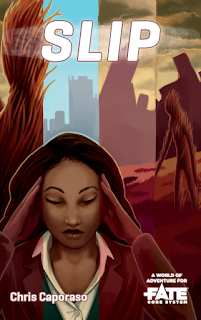 Let me start by breaking review protocol and tell you how much I love this...game? Campaign setting? Supplement? Whatever you want to call it, I think it's a great...product. Let's call it a product. I should also mention upfront, in case you are not familiar with Fate Core or their Worlds of Adventure line, that you will need a copy of the Fate Core rulebook to make full use of Slip.

I should also also mention that I can't go into a whole lot of detail with this review without spoiling it for potential players, because this book is pretty much exclusively for game masters. As a player you will only need to read about seven or eight pages of this fifty-one page PDF, so if it looks like something you are interested in playing you should only buy this product if you intend to give it to your favorite GM as a present.

The basic premise in Slip is that other universes have started to bleed into our own. Strange, alien universes inhabited by denizens that are utterly strange and hostile towards humanity. When a rift open and these denizens "slip" through, a "bleed event" occurs. These events are characterized by strange phenomena; people have nightmares or disappear or become violent, and as the event intensifies even the landscape around the rift can begin to change. If left unchecked, these bleed events have the potential to destroy entire cities and, eventually, the world.

While some people are aware that strange things are going on, most of humanity remains unaware of - or choose to ignore - the threat posed by these bleed events. Thankfully though, there are some people who are not only aware of what is going on, but they are actively trying to stop it. This is where the player characters come in: they are members of a para-military organization known as Vigilance. As members of Vigilance, the players will seek out these bleed events and attempt to close the rifts that are causing them. Ultimately, Vigilance would like to discover a means to put an end to the bleed events once and for all.

For the most part, the players are just regular people who are trying their best to deal with these awful things, although when the bleed events started occurring many people developed latent psychic powers. Players may or may not choose to take one of these abilities, which allow them to spend a fate point and do something like track the location of a denizen from the slip, or get a psychic impression from an object they are in contact with. Otherwise characters are average people dealing with horrible things, which really helps to play up the strong horror theme that Slip has going for it.

Frustratingly, the thing I like the most about Slip is the thing that I can talk about the least, as it involves the spoiler-rich information that is for the eyes of the game master only. I can say that Slip makes masterful use of "The Bronze Rule" (Fate Core pg. 270), and gives the game master a clear idea of what is going on in the world of Slip, including solid information on how to run a Slip campaign and a broad view of how things can progress and provides some ideas as to how the players could succeed or fail in their ultimate goal of stopping the bleed events. Everything about the way the information is presented here showcases what Fate can do, and really opened my eyes to some things about world and adventure design using Fate that I hadn't previously considered. This is not a game about running an endless campaign, or something you would necessarily want to play over and over again with the same group of people. Instead, it presents a situation, some possible means of resolution, and some information about the sort of things that could happen along the way. It's basically a blueprint for a one shot campaign that you could play for anywhere from maybe five to fifteen sessions or so, depending on your style and the pacing that you and your group prefer.

Finally, the sample adventure provided does a great job of pulling all of the concepts and "fluff" together and really showing you how everything works. It presents a problem with multiple solutions and multiple avenues of exploration. The book also provides some excellent information on designing your own Slip adventures, including examples that you can use to flesh out an entire adventure. As someone who has long been interested in Fate but who hasn't had many opportunities to play or run many games of it, I can say that this book really helped me understand a lot about Fate adventure design, and provided me with a good outline and solid design concepts that broadened my understanding of Fate as a whole.

If you've been wanting to run a Fate game and you like the sound of inter-dimensional horror then what are you waiting for? Go get Slip right now!