It's been a bit longer between updates than I intended, which tends to happen to me these days, and I promise sometime in the not too distant future I'll have a blog update that isn't about my Reading Challenge or my Boardgame Challenge.

But for now, let's take a look at some truly dismal progress and some much-more-promising-but-still-short-of-where-it-needs-to-be progress. First, the good news: 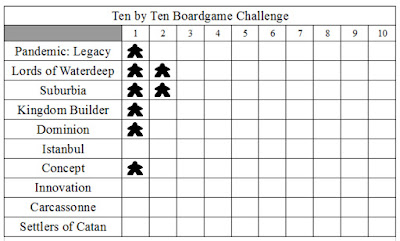 I'm actually impressed! That's a decent bit of boardgaming I've managed to get done since I announced this challenge. Even just a few games in I'm really starting to appreciate that playing the same game just ten times in a year is actually quite a lot of plays. I think if I get anywhere near that goal I'll have a better idea of what games hold my interest and why, and thus I'll have a better understanding of what sort of games I should purchase in the future. Speaking of purchases, astute readers may have noticed that I have swapped one of the games on my list for a different game. Istanbul has replaced Joking Hazard on this list, because I just recently purchased it and I'm excited to play it! I'm still excited about Joking Hazard as well, but I thought Istanbul deserved to be on the list a little bit more since it's a little bit more "boardgamey." And also because Joking Hazard will probably never be the sole reason we get together for a game night; it's more of a dessert game, to be enjoyed after the main course of gaming has been served and the beers are almost gone. So, to summarize: January was a good start to the boardgame challenge, and much fun was had. However, it turns out that one hundred games is actually a lot of games to play in a year, and a pace of eight games a month isn't quite enough to get it done. But it's also not a dark hole from which I will likely never crawl out of, which brings us to the reading challenge: 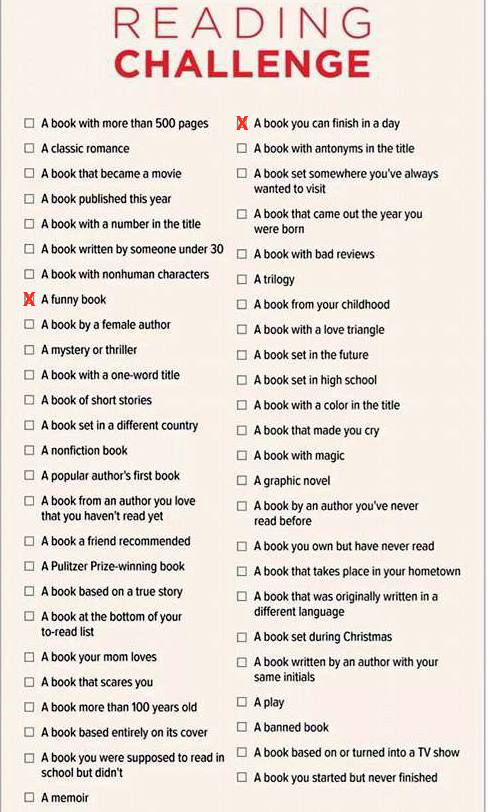 Yeah...
I've kind of dropped the ball here, and I'm worried that I've already lost too much ground to recover. I only read two books in the month of January - and one was "a book that you can finish in a day!" It actually took me a lot longer than a day to finish that book, but I'm confident that if I'd had a whole day to devote to reading I could have made it through the 175 pages of The Jewel In The Skull (for some reason my copy has almost 20 more pages than the version I'm linking to).

I picked this book up on a whim at a used book store ages ago and never got around to reading it until last month (reading books I already own but haven't read will be a recurring theme). However, I have read several Elric of Melnibone stories, so I was familiar with Michael Moorcock's work and this book met my expectations. Moorcock's writing relies heavily on deus ex machina, with characters frequently overcoming contrived situations via a means that was contrived specifically to overcome said contrivance (think of Adam West's Batman and his utility belt and you're on the right track). This is pretty common in pulp/serial fantasy,  but the outrageous, imaginative, and often ludicrous nature of Moorcock's contrivances set him apart from the field and always make for an entertaining -if not particularly clever or complex - read. I mean, you're never going to read a series of Michael Moorcock stories and marvel at the nuanced way that subtle plot elements throughout the story unify and build to some grand denouement, but you might read a story where several versions of the same person from parallel realities merge together to defeat some evil sorcerer on what seems to be a record in what seems to be some sort of giant space-jukebox (that happened in an Elric book, not the book I just read), and that can go a long way to make up for the absence of a complex plot. To summarize: this book is certainly not a masterpiece of fantasy literature by any stretch, and honestly isn't even that good, but there is something about the story and Moorcock's writing that, despite this, makes me want to pick up the next books in the series and see what crazy shit happens to Dorian Hawkmoon.

As for the Reading Challenge in general, I haven't lost hope completely despite a dismal start, and I do intend to keep at it all year no matter how many books I end up reading. So yeah, that's it for now. Until next time: read more books and play more games!
Posted by Unknown at 10:53 AM