Rambler Reviews: Whispers From the Void 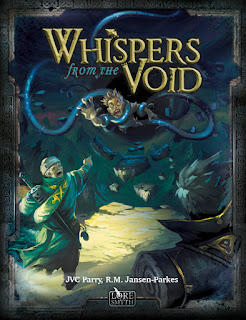 "Whispers From the Void” is the much-anticipated second adventure from publisher LoreSmyth, and is a follow up to their adventure “The Claws of Madness,” which I have previously reviewed here. The PDF consists of 34 full-color pages, with the layout and artwork both being of the high quality I have come to expect and appreciate from LoreSmyth. The adventure is cleanly organized in a manner consistent with its predecessor, and there are useful appendices for monsters, magic items, and details about the mysterious "Realm Rift." So it looks good, but is it good? Let's dive right in and I'll tell you what I think.

I appreciate that every effort has been made to make this work as a standalone adventure, even though it is very clearly a sequel to a previous adventure. Designing an adventure so that it makes sense to completely new players as well as those who have played a previous adventure involves walking a fine line, and overall I believe Whispers of the Void succeeds in walking that line. Information is presented with the assumption that neither the players nor the dungeon master are familiar with the previous adventure, but when events from The Claws of Madness may have altered the events, locations, or NPCs presented here this is clearly noted. This approach works well, and new players and dungeon masters should have no trouble playing through Whispers of the Void as a standalone adventure, though I would recommend that new dungeon masters take a moment to familiarize themselves with the magic items and realm rift appendices before reading through the adventure proper. Despite having said all of that, I feel like this adventure works best as a sequel rather than a standalone, as information and events from the previous adventure will have players much more invested in the events of this adventure than the “cold start” plot hooks that are presented.

Whether you've played the previous adventure or not though, Whispers of the Void has a lot to offer. The story basically goes like this: a rip in the fabricate of reality (referred to as the realm rift) has been leaking magic from the Far Realm into the world. This has led to ghastly mutations and other strange phenomena. The players learn that there is a sect of druids who may know how to close the realm rift, but they also learn that there is a mysterious cult, known as the Prophets of the Void, who more or less have the opposite goal in mind. For the players, accomplishing their goals will involve a good bit of wilderness exploration, a little bit of urban investigation, some role-playing, a tense chase and rescue operation, and what could prove to be some fairly challenging combat encounters. Overall the adventure has a nice flow to it, with a good sense of plotting, pace and urgency to keep things moving along. I also like this adventure takes place at locations that are almost entirely outside, giving outdoorsy types a chance to shine that they don't often get in your typical dungeon crawl.

Much of the adventure will revolve around locating the Monosis druids, subsequently exploring the Duskthorn Forest, and then chasing down the Prophets of the Void. Player's have the ability to discover information about the druids and the Prophets in several different ways which is nice, but there is the potential for one encounter in the town of Moonstone – if it happens and goes poorly for the bad guys – to derail the plot somewhat and leave the dungeon master scrambling to improvise a “Plan B.” Otherwise each section of the adventure leads into the next nicely, and all of the information is presented in a logical order, without the need to scroll back and forth throughout the PDF a lot during the course of the adventure (the exception to this would be looking up monster stats, so it might be worth printing out the five page monster appendix ahead of time for easy reference).

A good portion of the adventure will likely take place in Duskthorn Forest, the dark and mysterious home of the Monosis Druids. I really like that the random encounter chart for Duskthorn includes interesting options for both combat and non-combat encounters, allowing you to tailor the encounters to your party's playing style if you so desire. There is also a time-sensitive element to the exploration of Duskthorn which I quite like, as it forces players to be more judicious with the use of their powers and more discriminate when deciding if they should take long rests or not.

Unless things have gone horribly awry, the adventure should end with a river chase and a climactic battle in the town of Tondell. This should be a pretty tense and exciting fight, with varying degrees of difficulty depending on how a few things go and have gone leading up to the climax. Similar to The Claws of Madness, the adventure ends with somewhat of a cliffhanger, and an exasperation of the realm rift problem rather than a solution. I believe the intention is to follow this adventure up with another adventure (possibly “The Flight of Vorden,” which is already being advertised on the LoreSmythwebsite), but as of right now if you plan to play Whispers of the Void and continue to play afterwards you will need to improvise your own way to wrap things up or continue on with the story. The adventure does give you a few ideas in this regard, but these suggestions are very simple and brief, so you will have to do the heavy lifting yourself.

So what do I think? If you've recently played The Claws of Madness and want to keep that story going then I would say absolutely pick up Whispers From the Void, the story follows logically from the previous adventure and keeps the action going. Just know that the realm rift issue is not resolved in this adventure so if you want to keep going after this you're going to be on your own, at least until The Flight of Vorden is released (I think). If you're coming in cold this is still a solid adventure, so long as you don't mind adding a story about rips in the fabric of reality to your campaign world and then figuring out how to close them yourself. This really isn't as hard as it sounds; if you're ready to move on to something else after this adventure you could easily say that the Monosis Druids are able to perform a ritual and close the realm rift. Easy-peasy. On the other hand, if you've always wanted to add more tentacles to your game but weren't sure how this could be your answer!