Recently I was fortunate enough to play an early review copy of Dwarven Traders, a new boardgame from 2D6.EE Games that is live on Kickstarter now! Let's head  on down into the gemstone mines and I'll tell you what I think.

First, I just wanted to note that while I only played a review copy I still really liked the artwork on the main board, trading cards, and the player boards, and I hope what I saw or something similar makes it in to the finished product. 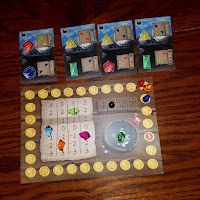 The game itself is a light game in which two to four players will mine and sell gems of various colors, with each of these actions affecting the future value of some or all of the gem types. The game should play in thirty minutes or so, making it a great “opener” on game night. Game play is pretty straightforward; on your turn you will either mine a gem, sell a gem, or possibly perform both of these actions. You will do this by selecting on of the four available trading cards, each of which will affect the gem market in a different way. If you mine a gem you simply add a gem of the appropriate color to your player board. If you sell a gem you remove it from the round and move your player token up or down on the score track, depending on the current value of the sold gem. You then adjust the value of all gems for each action you performed, as indicated on the trading card you selected. 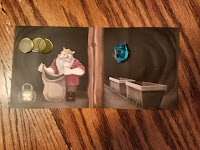 After every player takes a turn performing these actions and adjusting the gem market the player in last place may make a final trade, either swapping gems with another player or with the “smuggler,” who is kind of like an extra player who doesn't take any actions but does have a gem, does move on the scoring track, and can win the game, making you and your friends look foolish. After all of this, players sell any remaining gems they have, hopefully for a profit but possibly at a loss. Player tokens are moved up and down the score track accordingly, and the round is scored. The game will last four rounds. And that's it!

The strategy of the game lies in trying to make sure you end up with the most valuable color of gems at the end of the round. To do this you will need to pay attention to what color gems the other players have, and what options they have access to based on what trading cards are available. Players can only ever have two gems at a time though, and there are only four trading cards (which limit what you can mine or sell) in play each round, so there isn't much danger of analysis-paralysis. There isn't any hidden information when it comes to what gems people have, but each time a player uses one of the double-sided trading cards it is flipped over to reveal a new set of options that future players can take advantage of. This can make determining the best action difficult, especially if you take your turn early in the round order. This, and the fact that there may not be a trading card available on your turn that allows you to sell your color of gem, can make some of your turns feel limited. Several times I found myself stuck with a valuable gem I couldn't sell, while all of the mining options I had available would yield a gem of mediocre value and tank the value of the gem I already owned. Most of the time your choices do feel meaningful though, and you will find that if you can't better your own position you can probably at least make a play that will worsen other people's positions. For this reason you are always interested in what other people are doing on their turns, watching to see if their moves either worsen your situation or perhaps advance the smuggler ahead of you on the scoring track.

The smuggler mechanic is interesting as well. Each gem can only fluctuate in value from +3 to -3 gold, and any action you take that would push a gem value above or below this threshold scores points for the smuggler instead. The idea is that, since the smuggler can win the game this way, players should avoid taking actions that score the smuggler points. However, in all of the games I played, everyone would rather see the smuggler win than another player, so if a player wasn't winning but saw an opportunity to hurt the player who was, they would typically take the action that hurt the lead player even if it caused the smuggler to take the lead. This can lead to some humorously counter-intuitive game play, and games where nobody wins, but it's still a lot of fun.

My favorite part of the game is the end of every round. I actually enjoy being the last player to go, and often it's fun and advantageous to be in last place so you can get that final trade. The final value adjustments and this last trade are always tense moments, with lots of joking and pleading from other players around the table as they beg the last place player to swap gems with someone else. I also like that the game lasts just as long as it should for what it does. We played several games even that lasted fewer than the thirty minutes suggested by the rules and the rounds go by quick, so if your actions on one of your turns feel a bit arbitrary it isn't a big deal because your next turn will be back around soon enough. All in all it is a fun, light game. And while Dwarven Traders probably isn't going to be the main event of your game night, it should make for a great before and after game that takes very little time to explain, setup and play.
Posted by Unknown at 7:06 PM